Yesterday I noticed two more reviews of 'Win with the Stonewall Dutch' on the net:

Donaldson's review focuses more on the opening than on the book. That happened all the time with 'Win with the London System' with a lot of reviewers stating that the book was fine but the subject boring. Fortunately Donaldson likes the Stonewall and quotes Kramnik's endorsing but slightly dated statements in Dvoretsky's 'Positional Chess'.

I found Peter Heine Nielsen's review very interesting. The great Dane is generally considered one of the best prepared GMs around. He has not been playing a lot lately but being a second for Anand and Carlsen is not less prestigious than some tournament wins. He points out that the Stonewall to some extent a Norwegian specialty and is of course right. All the early Norwegian GMs (Agdestein, Gausel, Djurhuus, Tisdall and Østenstad) played it regularly in the late eighties and early nineties (usually in combination with the French) and I think the main reason its popularity slowly declined in Norway was the fact that most of these players got less active on the tournament circuit.
Below you can see the original text (in danish) and my attempted translation.

An outstanding book. In addition to the authors, Leif Erlend Johannessen has been an advisor and Simen Agdestein has written a preface and been involved in the chapters with illustrative games. Agdestein has had great success with the Dutch Stonewall himself and describes the typical plans well. The Stonewall is a strategical opening with great depth and exactly for this reason one of the authors - Ivar Bern - has used it successfully in correspondence chess where he won the World Championship.


The computers normally prefer White but don't always understand the atypical positions where Black has optical pawn weaknesses and a poor bishop but in reality has an excellent position. Not only do the authors rehabilitate an underestimated opening - they even do so by means of inspiring chapters supported by the personal experiences of leading experts. And although they admit being inspired by Jens Kristiansen's famous article on the opening here - in the 'Skakbladet' - you can sense that they are conveying a kind of common Norwegian chess perception.

Block with the Rook

I am not sure how the publishing companies reason about the matter, but as an author it seems an obvious advantage to be able to build on other authors' analysis; that is to have a recent work on your subject available. In order to do so, you need in practical terms to publish your work 3-4 months later than your competitor. This may seem a lot but you must calculate at least six weeks for typesetting and printing and you will frequently need one week to get hold of a newly published book.

I have for some time been curious about what Everyman would offer in their Dangerous Weapons: The Dutch: Dazzle your Opponent! Some of the answer is now available as downloadable pdf-files at their website.

I was not very surprised by their suggestions of 1.d4 f5 2.Nh3!? and 2.Nf3 Nf6 3.h3!? as weapons for White. While it was obviously impossible to devote much attention to these lines in 'Win with the Stonewall Dutch', I noted that both lines had some sting while researching the book. The Everyman team probably will poke some holes in our very limited coverage of these lines but that's the nature of chess analysis (and I doubt that either of the lines will become very popular at master level).

In our Stonewall book we decided to recommend 2...g6 as it seemed less theoretically volatile, so in this line there is no overlap between the books. However, in the forthcoming revised edition of Summerscale's 'A Killer Chess Opening Repertoire' we recommend exactly this line for White.

Before agreeing to update the Summerscale book I set the condition that if it turned out that his 2.Bg5 analysis was getting shaky, I would replace his analysis with something less tactical (4.e3/4.Bg3 and 3.Bf4!? were the obvious candidates). However, I could find no major problem with his recommendation of 4.e4 and sent Gambit a manuscript based on 4.e4, including some analysis on 4...Rh7 (which Summerscale didn't mention in his original book). My conclusion (based on Rybka 3.0 and a friend who for some time hoped that 4...Rh7 solved all Black's problems in the 2.Bg5 variation) was that 4...Rh7 was close to lost for Black.

Now I must say I am a bit anxious to see what Williams' 21 pages of analysis offer. Unless I am very unlucky I will have his analysis available for the final proof-reading stage of the Killer book. In the meantime, here is a game that Williams needs to improve upon in his analysis: 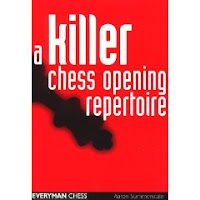 Do you know the original 'A Killer Chess Opening Repertoire'? It used to be one of my favorite chess opening books and when Gambit asked whether I was interested in updating it, I jumped at the opportunity.
The original work was a fairly slim volume at 144 pages. It has been out of print for some time now and as usual that causes the price offers on Amazon and e-Bay to skyrocket. I would expect that trend to be reversed or at least reduced by the arrival of the revised edition but you never know. There will almost certainly be someone who swear by the original edition and find all additions to detract from the book's value.

So in order to prepare myself for the coming slaughter, I went searching for internet reviews of the 1998 edition. I seemed to remember a review by a GM on the British Chess Federation's website but was unable to find it. I was also unable to find any review of the book at Silman's large depository so I ended up with a surprising meagre catch:
In his book 'A Killer Chess Opening Repertoire' the English GM Summerscale presents an interesting, unusual, aggressive and rather complete opening repertoire for White. The initial moves are 1.d4 and 2.Nf3. Against the Grünfeld and the King's Indian Summerscale offers the Barry Attack (1.d4 Nf6 2.Nf3 g6 3.Nc3 d5 4.Bf4 Bg7 5.e3), against the Pirc and Modern defences he recommends 1.d4 Nf6 2.Nf3 g6 3.Nc3 Bg7 4.e4 d6 5.Be3. Here he also examins variations without ...Nf6 for Black. The Queen's Gambit is avoided by means of the Colle-Zukertort set-up (1.d4 d5 2.Nf3 g6 3.e3 e6 4.Bd3 c5 5.b3). Of course Summerscale also discusses various Anti-Colle systems. Then follows a chapter on the Queen's Indian (1.d4 Nf6 2.Nf3 e6 3.e3 b6 4.Bd3 Bb7 5.0-0 c5 6.c4), the Benoni (1.d4 Nf6 2.Nf3 c5 3.d5 e6 4.Nc3) as well as the Dutch (1.d4 f5 2.Bg5). In the final chapter various sidelines are examined.

The offered repertoire parts fit well together and make a rather complete repertoire. The killer repertoire contains relatively few theoretical variations. Nevertheless there no doubt are books that treat some of the lines in more detail. This may also be the reason why Summerscale only recommends his own book for players rated up to 2000 Elo. All taken into account the book offers White an unusual but yet correct and aggressive repertoire for the price of 45 Deutsche Mark. However, you will need some basic English reading skills in order to understand Summerscale's explanations.

PS
My apologies for neglecting this blog for the past couple of months. I first had a very busy October and then was a bit apatic in November. I now plan to resume blogging as normal.
Posted by Sverre Johnsen at Wednesday, December 02, 2009 4 comments: Links to this post