These days I am reading Cyrus Lakdawala’s “Play the London System”. It’s an interesting read and I will probably return to the subject.

Our understanding of one opening is often influenced by our understanding (or lack of such) of other openings. I was curious when I saw Lakdawala briefly discard Black’s traditional mainline in the Barry attack (1.d4 d5 2.Bf4 Nf6 3.e3 g6 4.Nf3 Bg7 5.Be2 0–0 6.Nc3 c5 is the relevant London move-order) with the explanation that ‘7.dxc5 transposes to a favourable Reversed Catalan’ and some relatively brief variations. I must admit that the Catalan is not my field of expertise so I had to take a closer look at his variations - in particular as I had explored this line when researching ‘A Killer Chess Opening Repertoire’ (and concluded that Summerscale’s 7.Ne5 probably still is White’s best try):

This is the most popular reply and the only one mentioned in the book although 7...Nbd7!? has been played by Khalifman among others.

The exclamation mark is by Lakdawala and the move probably is White’s best try.

This is not mentioned in the book but has been played by Hebden and Lars Bo Hansen among others and is given an exclamation mark by Ftachnik in Megabase. Lakdawala only mentions 10...Na6 11.Be5! and White probably is better as ‘Bd4 is in the air’. The move is far from obvious but as there clearly are some threaths to c7 it's not particularly surprising either.

Rybka claims that 18.Qa3 is equal. That may well be right; the position looks somewhat strange and I find it hard to evaluate.


Conclusion:
I have not found a path to advantage for White after 7.dxc5. That doesn't mean there isn't one, but Lakdawala's explanation clearly isn't sufficient for me. Maybe someone who knows more about the Catalan (and consequently more about the Reversed Catalan too) can point me in the right direction?
Posted by Sverre Johnsen at Friday, July 30, 2010 8 comments: Links to this post

I have somewhere promised an overview and comparison of the so-called Queen's Pawn Openings (also known as D-pawn Specials or even D-pawn Deviations). That is basically all White's alternatives to the Queen's Gambit and the Catalan. In this first part I will only give a list and some brief comments.
Group IA: 1.d4 d5, alternatives to 2.Nf3 and 2.c4

1...d5 is an older move than 1...Nf6, so this is the classical starting position for the Queen's Pawn Openings. By deviating at this early point White makes sure that the game will be played on his homeground.

2.Nf3 is a sound and flexible move and the starting point of most Queen's Pawn openings. Black has a few interesting alternatives to 2...Nf6, such as 2...c5 and 2...Bf5!? but most alternatives, including 2...c6 and 2...e6 allow White to go ahead with his planned set-up.

After 3.e3 we are in Colle territory, and might reasonably stop at that, noting that 4.c4 would still be a (harmless) Queen's Gambit. However, the Colle comes in different flavours too:


a) 4.dxc5 - This is an attempt to play the Queen's Gambit accepted a tempo up but 4...e6 probably gives theoretical equality.
b) 4.b3 - This is not White's most promising variation of the Colle Zukertort. After 4...Nc6 5.Bb2 Bg4 Black is equal. Also Kaufman's 4...cxd4, taking advantage of the fact that Bc1 not can use two diagonals, makes sense.
c) 4.c3 - Heads for the (Classical) Koltanowski Colle. The interesting question is whether Black now should play the modest 4...e6 or the more ambitious 4...Nc6.
d) 4.Nbd2 - A seemingly sensible Colle move that isn't even mentioned in several works on the Colle.
e) 4.Bd3!? - A slightly provocative attempt to stop ...Bf5 and keep open both the b3 and c3 options. The critical reply of course is 4...c4!?
f) 4.a3!? - An attempt to reverse colours - perhaps planning dxc5 followed by b4 and c4. But is a3 really useful after 4...cxd4 5.exd4?
g) 4.Ne5 - White intends to follow up with f4, Bd3 and c3, reaching a Stonewall Attack.

This is the traditional starting position of the Colle. It should be noted that this position is at least as likely to appear from the move-order 1.d4 Nf6 2.Nf3 e6 3.e3 d5. White can still return to lines of the Queen's Gambit with 4.c4 but within the Colle there are these options:


a) 4.Be2 - A reversed Queen's Gambit Declined. Solid for Black but unambitious for White.
b) 4.b3 - Reveals White's plan to play a Colle Zukertort earlier than necessary.
c) 4.c3 - Reveals White's plan to play a Colle Koltanowski earlier than necessary.
d) 4.a3 - Attempts to play a Queen's Gambit Accepted a tempo or two up after 4...c5 5.dxc5 Bxc5 6.b4 but that's hardly sufficient for an advantage.
e) 4.Ne5 - White intends to follow up with f4, Bd3 and c3, reaching a Stonewall Attack. Probably more promising with Black's light-squared bishop locked in than the 3...c5 version.
f) 4.Nbd2!? - A seemingly sensible Colle move that isn't even mentioned in several works on the Colle.
g) After the main move 4.Bd3 and the extremely natural 4...c5 White has these options:
g1) 5.c4 - Still a Queen's Gambit (a rather harmless Tarrasch)
g2) 5.0–0 - A provocative attempt to keep options open. 5...c4 6.Be2 b5 is the critical line.
g3) 5.b3! - The Colle Zukertort, a legitimate try for an advantage even at GM level.
g4) 5.c3 - The Colle Koltanowski, actually a reversed Slav and quite dangerous for the unprepared.

With his first move Black displays a less compromising attitude than 1...d5 does. This can be seen as a reason for White to avoid a theoretical confrontation. However, it must also be said that it is probably harder for White to fight for a real advantage without an early c4 if Black knows what he is doing.

Nimzo- and Queen's Indian players may have a tougher task against the D-pawn Specials, (in particular the Colle) than others. Against this move-order the Colle Zukertort probably holds prospects for a small advantage.

a) 3.e3 - White heads for some branch of the Colle but may need other ideas against 3...b6 and 3...c5.
b) 3.Bg5 - The Torre System
c) 3.Bf4 - An important branch of the London System
d) 3.c3 - A tricky move, keeping open options to enter the Koltanowski Colle, the London or the Torre.
e) 3.Nbd2 - Possibly an underestimated branch of the Colle. Black must decide whether he considers e4 a threat or not.
f) 3.a3 - Another branch of the Prie System. White takes on Black's role with a marginally useful extra tempo.
g) 3.b3 - Heads for a Colle Zukertort but White gains nothing by revealing his plan too early.
h) 3.h3 - Another joke path to a playable if uninspiring London set-up.
i) 3.Nc3 - Looks similar to the Barry Attack but is rather pointless as long as Black hasn't played ...g6.

The King's Indian is one of the toughest tests for any Queen's Pawn System. Black develops quickly and has various ways to challenge the centre. Lines with ...d6 followed by ...e5 or ...c5 probably are the most challenging but quieter lines with ...d5 are also available.

That's all folks! (well, I am sure I have forgotten something, so I expect to edit and update the overview)

The plan now is to take a closer look at some of the systems (mainly the Colle London and Torre), comparing them and perhaps suggest how some systems can be combined. I have also started collecting bibliographies.

Updated September 1st
I included some lines given by an anonymous reader.
Posted by Sverre Johnsen at Thursday, July 29, 2010 21 comments: Links to this post 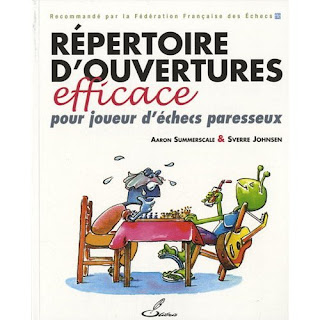 I must admit I was surprised today to discover that "A Killer Chess Opening Repertoire" has been translated to French.

The new title is "Répertoire d'ouvertures efficace" which I assume must mean "An Efficient Opening Repertoire". The subtitle "pour joueur d'échecs paresseux" I think must mean "for lazy chessplayers". A little less bloodthirsty than the original English title.

As you can see, also the cover is a little less aggressive. I prefer Wolff Morrow's artwork, but the French one is quite nice too, in a very different way. Can anyone tell me the name of the artist (I assume his signature can be seen below the drawing, but I am unable to read it)?

I am proud to now have been translated to two major European languages, and hope Gambit Publishing or the French publisher Olibris will be kind enough to send me a few copies.

Update July 21st
I found this advertisment which includes a review. My French is quite poor but I will try to translate the conclusion:


Another asset of  the work is the choice of illustrative games, played by players who are not Grandmasters. This is a good idea because for us amateurs this is what occurs in the majority of chess tournaments. Let us acknowledge that this simply is a brilliant idea!

Well, I hope that isn't too inaccurate. Please inform me if you can improve the translation. Anyway, "Chess & Strategy" appears to also be a chess vendor, so the 'review' cannot be expected to be very critical and I will not read too much into it.
Posted by Sverre Johnsen at Monday, July 19, 2010 5 comments: Links to this post

After a few long periods of dormancy, Chessville now seems to be fully activated again. Today I noted a review of 'Win with the Stonewall Dutch' by Bill McGeary.

As the reader can easily confirm, McGeary is fairly detailed and in general quite positive. I will just quote his conclusion:
I am sure that new ideas and valuations in lines have likely already come to light since the publication of this book, but it remains an excellent work for a player looking to bring the Stonewall into their armory. Because of the strength of the writers, and the complexity of material, this book might be a bit bewildering for players below the 2000 level, and even some above, yet it could well act as one of the steps along the road upward.


My apologies to my readers for letting this blog become a list of reviews of my books. Some genuine chess content will appear in the near future.
Posted by Sverre Johnsen at Saturday, July 10, 2010 9 comments: Links to this post