I cannot say I find it beautiful. I think the King's Gambit should wear something more classical. However, it probably draws a potential buyer's attention and that's quite an important feature.

I have so far not paid much attention to cover design but I have been very pleased with the covers by Wolff Morrow that Gambit Publication has provided for my books. That attitude will quite soon have to change as the books I plan to publish will need covers. The classic and relatively easy solution is a picture of the subject position on a good-looking wooden chess set. Unfortunately that will not draw a lot of attention, so I will need to add a twist. I will keep my eyes open.
Posted by Sverre Johnsen at Thursday, September 22, 2011 4 comments: Links to this post

There are at least two new King's Gambit books on the horizon before my own book hopefully will be available some time in late spring 2012.

First in the row is John Shaw for Quality Chess with simply 'The King's Gambit': 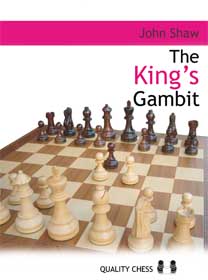 The book is scheduled for October 2011. However, it has now been delayed so many times (and even changed author) that I take the announced publishing date with a grain of salt.

I have more confidence in the content. Quality Chess have sometimes delivered products with surprising gaps in the material but their analysis has always been excellent.

Next out is Timothy Taylor for Everyman Chess with 'Attacking Chess: The King's Gambit'. Judging from the Everyman site it hasn't yet got a cover design. The book is scheduled for January 2012 (in EU) and as far as I know Taylor has generally kept his deadlines. His analysis tend to be lighter and somewhat less trustworthy QC's but often thought provoking. I look forward to seeing his effort.

How will the existence of these two influence the sales potential for a third book? I must admit that I don't know. One point in my favour is the fact that I probably will be able to list these competing books in my bibliography. Reviews and publishing order will certainly influence the sales numbers. My gut feeling is that those who already love the King's Gambit will open their pockets and buy all new material but maybe the financial uncertainity even will influence this part of the economy?
Another factor is the position and reputation of the chess publishing companies. How easy will it be to convince London Chess Center, Niggemann, New in Chess or Chess4Less to promote a book from a new publishing company. I am eager to find out!
Posted by Sverre Johnsen at Saturday, September 10, 2011 7 comments: Links to this post

A Brief Return to Chess Blogging

My apologies for letting this blog sleep for so long with no explanation. I will return for some months now and some time in the spring 2012 I hope to move to a more appropriate forum for my future chess writing.

Quite likely a lot of my next postings will be about the King's Gambit (D). 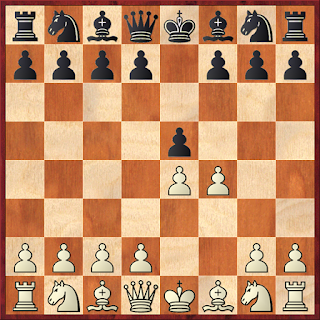 I am working on a manuscript on this fascinating opening now. I feel I have a lot of good content but I am struggling with the organization of the material. And of course there is always the danger that essential variations are refuted during analysis.

For now I don't have any co-author but I hope that will change in the coming month.

PS: I am using a new set of tools to produce diagrams. I expect there will be some test and trials for the next few days.
Posted by Sverre Johnsen at Tuesday, September 06, 2011 12 comments: Links to this post